The key of 'E' is easy to play on the guitar - not so simple on the piano - and often places a song at exactly the right pitch for comfortable singing. The odd thing about it is that for some unknown reason it often gives songs a slightly sad sound. For this reason, back in the 1970's (!) a lot of songs for guitar were written in the key of 'E'. If you find that you like playing in the key of E, then you might need to transpose songs using the 3 chord trick.

If you are transposing from G: first chord G becomes E, second chord C becomes A, and third chord D7 (G7) becomes B7.

If you are transposing from C: first chord C becomes E, second chord F becomes A, and third chord G7 becomes B7.

So here are the chords: 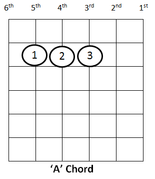 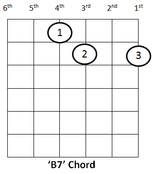 Some Songs Using these Chords